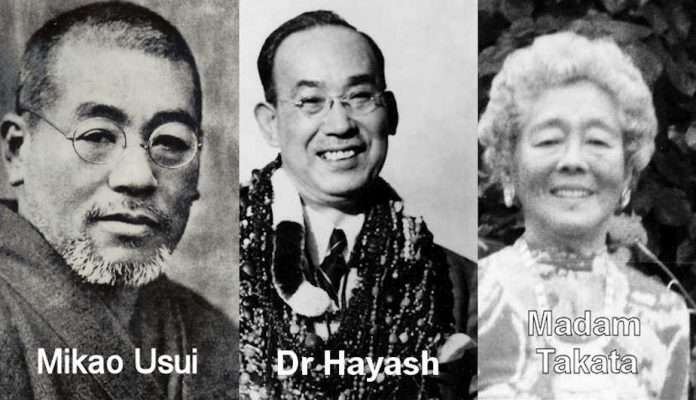 The History of Reiki in Brief

The history of reiki and the founder of modern day Reiki was Mikao Usui, also referred to as Dr. Usui in the western world and Usui Sensei in Japan (pictured above.) Usui Sensei rediscovered Reiki in the 1920’s when he was on a 21 day fast on Mt. Kurama in Japan. There are two stories of the history the of reiki and how it all happened. Firstly there is the western version as told by Madam Hawayo Takata who brought Reiki to the west. Secondly is the Japanese version, which was discovered by Frank Arjava Petter. He lived in Japan for a number of years in the 1990’s. There are some comparisons between the two stories. Dr. Chujiro Hayashi who healed, and taught Madam Takata. She is pictured above in the centre and Madam Takata to the right.

Madam Takata it seems, adapted the story of Usui Sensei’s fast and attunement to Reiki, to be more palatable to the western world. Mrs Takata taught that Usui Sensei was a Christian minister. It is said that one day, one of his students asked him why people did not heal as Jesus Christ had done. He could not answer the question. This intrigued him, and this is what set Usui Sensei, on the path to find out if this healing was still being practised.

He visited many Buddhist temples asking and they said, it was once practised, but is no longer used. He travelled far and wide in his search, to re-discover the lost art of Reiki. Visiting parts of Asia and Europe, as well as a visit to the united states of America. One of the things he found was that a healing power, had been used by some who called it, “The Tantra of the Lightning Flash”. This in part was where Reiki found its roots. 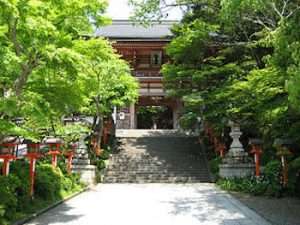 After several years of searching and many failures in his own personal life. Dr. Usui Sensei returned to his Buddhist monastery, at the bottom of Mt. Kurama. He ask to be sponsored on a 21 day fast, at the small monastery near the top of Mount Kurama.

Madam Takata taught that on the 21st day, Dr. Usui was sat outside and a white light came from the sky. At first he was scared, and considered hiding, but decided to sit there and wait. It struck him in the forehead and he went upon a mystical journey. During this journey he received a full attunement to reiki, and was reconnected with the Reiki universal life force. It was during this journey, that he was given the five symbols of Reiki to further empower the healing. When Usui Sensei came back to consciousness, several hours had passed. He then set off back down the mountain.

Madam Takata, taught of the first four miracles of Reiki. As Usui Sensei descended from Mt. Kurama he stubbed his tow. So he sat down and put his hand on to heal it. Then when he took his hand away, it was fully healed. This was the first miracle of modern Reiki. Soon he come to an inn, he asked for a big meal. The innkeeper did not wish to serve him such a great meal after his fast, feeling it would make Usui Sensei ill, but Usui Sensei insisted.

When the innkeepers daughter come with his food, Usui Sensei noticed one side of her face was very swollen. When asked she told him she had a bad tooth. Usui Sensei began to heal it. Soon the pain subsided and the swelling was reduced, this was the second miracle. Usui Sensei eat his meal with no ill effects, this was the third miracle. When Usui Sensei reach the temple at the bottom of Mt. Kurama he was told that the abbots sickness was keeping him bedridden. Usui over a few days healed him until he was well again. This was the fourth miracle of modern Reiki.

Frank Arjava Petter, who lived in Japan in the 1990’s. Did a lot of research into Reiki, and subsequently wrote one or more books, on the subject. One of them is, “This is Reiki”. In his time in Japan, he met one or two Reiki Masters, who had been attuned by Usui Sensei himself. They told him the story and history of Mikao Usui, and how Usui Reiki is alive and well in Japan to this day. They told him that Usui Senseis’, Reiki system is still being taught, and is closely following the traditional ways in which Usui Sensei taught it. Mikao Usui’s Reiki healing system in Japan is called, “Usui Shiki Ryoho”, that means the Usui System of Natural Healing.

So from what Frank Arjava Petter has written. Mikao Usui was born into a tendai buddhist family, and was of samurai cast. He later become a Buddhist priest/monk. At some point he became very interested, in the lost art of hands on life force healing. So indeed Usui Sensei, looked far and wide for understandings of the lost healing arts. He discover they had been used by some of the Buddhas as far back as 2,600 years ago. or even longer. His monastery had indeed sponsored him to fast on Mt. Kurama for the 21 days. During which time it is believe, that he might of stood under a waterfall, that struck the top of his head. This was to induce an altered state of mind, that was also practised by others.

It was during such a time, that he had his mystical journey, and became fully initiated and attuned to Reiki. Which is the universal life force energy and healing power, that he had searched to find for so long. As to whether he received the Reiki symbols in his attunement, it is uncertain. They maybe drawn from around him, from the many ancient texts that he read.

His own tendai buddhist love symbol, can be clearly seen today in the temple at the bottom of Mt. Kurama. And it looks very similar to the mental/emotional symbol, that is used in many western Reiki systems today. The distant and Master symbols, are written in kanji it appears. Reiki may have elements of Buddhism, Hinduism, Sanskrit and Shamanism within it. As for the first four miracles, they may or may not of happened. But there is no doubt Usui Sensei, was a remarkably powerful healer and a respected Sensei/teacher.

Usui Sensei, went on to attune some 2000 Reiki students in all. Among them, there were a limited amount of Reiki Masters. As only the most devoted students went on to become Reiki Masters. One of which was Dr. Hayashi. In time he practice Reiki in his clinic in Tokyo, until a big earthquake destroyed it. He then practised in a clinic some distance outside of Tokyo. During the big earthquake, there were a lot of people that needed help and healing. Usui Sensei healed and helped many, for which he was later honoured by the Japanese government.

Madam Takata, taught that we should charge for Reiki. This is because people would not understand the gift of healing they had received if not. She taught that Usui Sensei had in the beginning healed for free. But later many kept returning after a time. So he decided to charge, so that those coming for healing, might better understand and appreciate the gift healing has given them. It is understood that he charge what they call the middle road. Those with more paid more, and those with less paid less.

Usui Sensei at some stage decided it was better to create 3 levels of Reiki. This was to break it down for his students to learn more easily. As well as giving them more time to practice and develop their healing gifts. These levels are Reiki Level 1 – Shoden, which means First Teachings. Reiki Level 2 – Okuden, Hidden or Inner Teachings. Reiki Master Level 3 – Shinpiden, the Mystery Teachings. In some western Reiki systems Reiki Masters are sometimes taught in two levels. Part-A Reiki Master Healer and Part-B Reiki Master Teacher.

Dr. Hayashi was a disciple of Mikao Usui, played a major role in the spread of Reiki outside of Japan.

Dr. Hayashi had been a naval physician. Later he learned Reiki with Usui Sensei and gave Reiki to treat his patients. He studied with Usui Sensei in 1925. He developed his own system of Hayashi Reiki Kenkyu-kai in Tokyo. Shinano-machi, this was while Usui Sensei was still alive, and upheld the way Usui sensei had taught Reiki.

Sadly Dr Hayashi committed traditional suicide – seppuku in 1940. This was because he did not wish to be called back into the Japanese navy, at the beginning of the second world war.

Up until the 1990’s, it was believed that Madam Takata, was the last remaining Reiki Master in the world. That is until Frank Arjava Petter, found the Usui Shiki Ryoho, the Usui System of Natural Healing alive and well in Japan in the 1990’s. And is still going strong today.

We should be thankful to Madam Takata for bringing Reiki to the west. She did a great deal of good in her lifetime, to teach and promote reiki in the west. Madam Takata attuned some 22 Reiki Masters. They have helped to spread Reiki throughout the western world. To become a Reiki Master with Madam Takata cost $10,000 USD.

Her students were not allowed to take notes or sketch the symbols. This is why they vary so much, from original 22 Reiki Masters. This is part of the reason why they vary in different systems of Reiki, being passed down on from memory alone. We can be thankful, that in this modern day the cost of learning reiki, now comes within what most can afford.

Has inherited the office of the Grandmaster, which was founded in 1993. After Phyllis Lei Furumoto’s lineage was recognised (granddaughter or Hawayo Takata), to be the bearer of the title of Reiki Grandmaster of Usui Shiki Ryoho.

Credits: Dates of birth and death sourced from Wikipedia. Reseach from from reading “William Lee Rands – Reiki – The Healing Touch” & “Frank Aejava Petter – This is Reiki”

Crystals for Overwhelm – Choose These When Life Feels Like Too Much

The 7 Main Chakras Guide to The Spirits Chakra Energy System

Reiki Abilities – Developing them to Increase Your Healing Powers

5 Reasons to Add Indoor Plants to Your Home

Crystals for Overwhelm – Choose These When Life Feels Like Too...