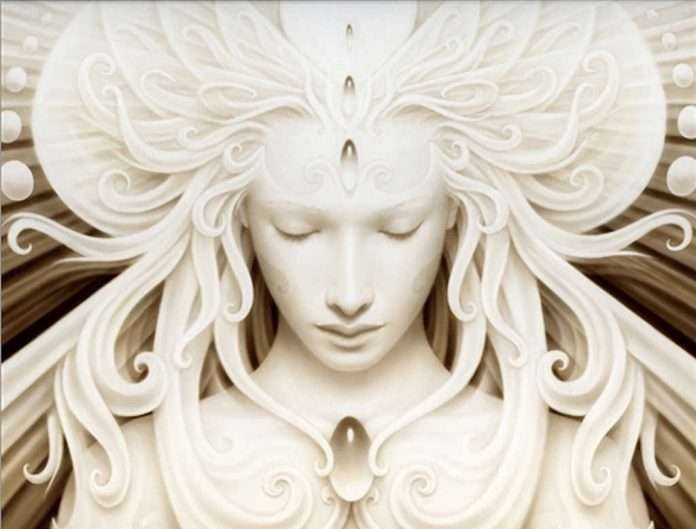 In a dream, my grandmother appeared to me as ‘The Shekinah’ embodied. I had the dream in 1992, a year after Grandmother died. I had ‘dabbled’ in Kabbalah, as well as read Tarot for 20 years at that time, but this dream is why I have since intentionally studied Kabbalah, Jewish mysticism, to learn what it has to teach about our connection to God. The dream of the Shekinah inspires me.

A Dream of the Shekinah Inspires Me to Learn

It’s a clear, full moon-lit night, and I’m walking, actually, gliding, on a white sand beach, beside an ocean that is a brilliant, unEarthly bright blue, like the Mediterranean Sea.

I’m drawn to a small white stucco house on the beach. I glide up the wooden steps, through the rough wooden door. Inside this one room house, I feel a ‘vibration’ in the air, as if the air is alive – odd, it’s like there is a wind in side the house, but without physical movement, a sense of a ‘force’ all around me. I’m in what may be called a vortex, energy that seems to whirl all around me.

Standing before a tall fireplace that gives a golden glow, is an elegantly tall woman in a simple, long white cotton dress. To her right is a rough-hewn wooden table. The woman greatly resembles my late maternal grandmother when she was younger. Her hair is long, a light golden brown, parted down the middle and pulled behind her head in a flowing pony tail. Her dress is belted with a golden cord, tied in an ornate knot that hangs in front, just below her waist.

She makes eye contact with me, and speaks – I see her mouth move, but the sound isn’t speech. It’s different – it’s a vibration I can feel in the air around me and also within me. I ‘feel’ her voice, as well as hear her.

She talks about The Shekinah

She tells me She is The Shekinah, and She is also my grandmother, and I must do as She instructs me. As I try to understand what She means, I look to the table and see Her hand is above a set of glowing white disks the size of large dinner plates, one behind the other, so they seem to stand on their edges. Although I can’t explain how I know this, I realize the disks are sephirot, symbols of energy emanations from a Kabbalastic graphic representation of the Tree of Life.

Shekinah/Grandma shows me one disk at a time, names them, and explains something about each one. She tells me them ‘in order’, and how they are related as God planned. It is an explanation of how God’s energy cascades down to the physical plane, stopping to transform at ten different steps.

As She speaks, golden writing appears on each sphere, in both Hebrew and English. I can read the names of each sefirot, but not see the details. She shows me ten such disks, then points into the air with her right index finger. Above her finger, a ball of light materializes. She tells me, “This is the Da’at”, and says I must come to know It, too. I have only a hint at it what it is, though, it’s hazy, hard to be certain, but it is important. I struggle to remember all that she has said.

She again reminds me it is imperative that I study the sefirot in detail for my spiritual development. She says it is a privilege, an opportunity, as well as my responsibility to do so.

In the dream, I’m now certain She is my grandmother, who at that time I believed was half Jewish, although a later DNA test revealed no such ancestry. She was nominally a Roman Catholic, but in life didn’t practice any religion, and yet, here she is before me, as the Shekinah. I don’t understand how that could be, but then again, maybe I do. I feel the warmth of her love for me, as I knew it when she was alive.

She looks downward, directing my attention with her left hand to her golden knotted belt, a weblike tangle I realize is in the form of a Merkabah, a three-dimensional Jewish star, which starts to glow very brightly from its center. The glow almost hurts my eyes.

As I squint to block its light, I involuntarily begin to glide backwards – to the door, out of the door, off the small porch, down the stairs, and back to the water’s edge. As I retreat, the house slips into the darkness, and I’m on the white sand beach again, alone in the moonlight, but I know now what I must do.

A little background: This story assumes you know something about Jewish mysticism. To make things clearer, please see the Wiki on Shekinah – http://en.wikipedia.org/wiki/Shekinah
In a nutshell, Shekinah is the ‘feminine’ energy of the Universe. The Shekhinah represents the feminine attributes of the presence of God for humanity.

To better understand the sefirot mentioned in the story, see https://en.m.wikipedia.org/wiki/Sefirot

Dream Analysis – What it Means to See Flowers in Your...

Health Benefits of Drinking Tea – Feel Better and Get Grounded!

Dreaming of Crystals? What The Stones in Your Dreams Mean

Fall Nature Walks – How to Add Spirituality to the Great...

Yiddish
error: Content is protected !!
We use cookies to ensure that we give you the best experience on our website. If you continue to use this site we will assume that you are happy with it.Ok