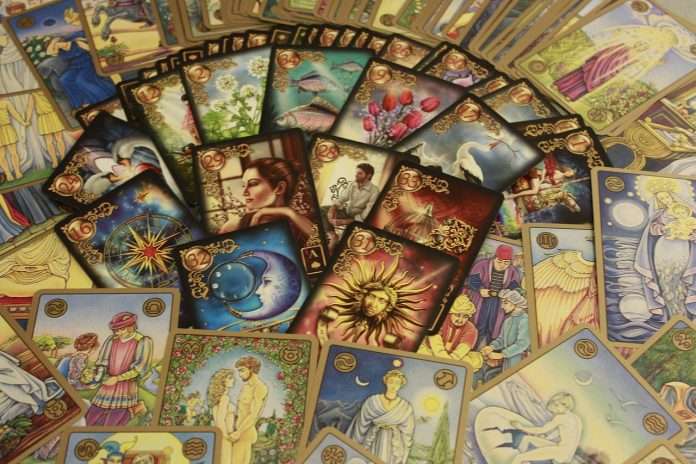 Tarot is a divination tool that can be used to learn lots of things about one’s current and future state through direct interpretation of the cards by the reader. Many don’t realize tarot can be used to elicit communication with the spirit world. I’ve been reading Tarot cards since 1974, and it had not occurred to me in all that time to use tarot for mediumship. But how to do it? Last year, I set about determining a way, as tarot is my divination tool of choice, and a need had arisen in my life to talk to the dead.

My Reason to Connect

In 2018 I had two dreams of my late mother. She and I didn’t always have a good relationship. She was physically and psychologically abusive throughout my childhood in our family home. When she died in 2011, long after she’d apologized to me for her many years of damaging behaviour. We had reached a state of peaceful coexistence by the time she passed. My two lucid dreams of her were about her attempts to communicate with me from the other side.

In the first dream, we were sitting opposite each other in two rooms separated by a dark curtain. I only faintly saw her face in the shadows. She seemed nervous and wouldn’t make eye contact with me. She asked if she could speak to me. I agreed, and requested she sit by me to do so. She walked over and sat at the opposite end of the couch I was on, facing me with arms crossed. At first, she would not look directly at me.

She said she wanted to talk because she was sorry for how she’d treated me, and needed to make amends by helping me. I responded in the affirmative. I understood this was something she had to do in order to evolve spiritually, so I would be helping her, while building a valuable rapport we did not share when she was alive. Then we made eye contact, and I knew it was a good thing we had met in the dream, but I awoke before anything further could be established.

The second dream came a couple of weeks later. In that dream, I was in a hotel room at night, about to get into bed, when a person wearing a long cloak and hood entered the room. Their face was obscured at first, but then I saw it was my mother. Her eyes were bright, and she said to me, “I want to be by your side”. I understood that to mean she wanted to establish an ongoing relationship with me from the other side. I again agreed I would let that happen.

Putting it Together Using Tarot Cards

I set about trying to communicate with her from the physical plane. For a few months, I would just think about a question for her, then ‘listen’ for her response. I got some valid answers, but that process seemed erratic. I wanted something more concrete. Then it occurred to me to use Tarot for this purpose.

Using tarot card to commune with the dead and spirit guides is not a new idea, there are lots of suggested spreads for this in books and online. Some are elaborate, involving multiple decks, sage-ing and crystals. I wanted something more accessible. I gleaned some ideas from the web, then put together my own spread that works very well, which I present to you here.

Whom Do You Trust?

I don’t believe in ‘evil spirits’ per se, not in the form of demons or devils. I do believe there are unhappy spirits of those who have died but who have not crossed into The Light. They are lost and confused. They can be as nice or obnoxious in the afterlife as they were in this life, but I don’t believe they can harm our spirits. However, they can be tricky, though. Thus my major concern is clarifying with whom I am connecting. I also want to ensure I get the message clearly and correctly. So I use some safeguard ‘test questions’ to establish the identity of the spirit messenger.

If you are fearful of being ‘possessed’ (I’m not), or encountering a mean-spirited spirit, then by all means do something to protect yourself. Envelop yourself in white or pink light, say a prayer, burn sage or incense, meditate to attune your energy to a higher level, do whatever it takes to make yourself comfortable for the process. I don’t do that, though. As a Reiki master and teacher (Shenpiden), I know universal energy is our friend, and has only ever been a positive, productive and healing experience for me.

There are seven card positions in my spread, the first six are the questions that establish relationship and rapport. I mentally ‘summoned’ my mother, and she responded thru the cards.

The seventh position and beyond are for your subject matter questions to the communicating spirit. Write down your questions, then draw a card for each question. You may wish to reference the Time Tarot prediction method I wrote about in October 2018’s Spirit Earth Magazine, to clarify your answers if they involve the future.

Below is a chart for this mediumship spread. It’s brief and to the point, simple. The complexity arises in the topical questions you ask.

For instance, I asked her:

Q. Will I move house within the year? When will that happen – give me a timeframe. In which direction shall I move?

A. Two of Wands. We know the two of Wands represents the formulation of plans. It also means reunion and reconnection. In Time Tarot, this card’s timeframe is 20 March to 31 March, presumably next year. The man in the card faces to his left. I take that as a westerly direction, as he holds a globe of planet Earth upright in his hand.

My interpretation of this answer is I will at least be formulating a plan to move west of my current residence by the end of March next year. This aligns in a timely manner with my interest in relocating to be near my eldest son, who plans to move to Arizona next year in April. That would certainly be a reunion.

Make this mediumship spread your own as a way to connect with those on the Other Side. Your spirit guide, or someone you know and love may be waiting to share helpful information with you.

Editor: Learn how to ground and protect from negative spirits

Picking a Decks of Tarot Cards

Spiritual Spring Cleaning – How to Make the Most of Your Home

What is Candle Magic and How Does it Work?

At Home Workouts – Effective Exercises and Establishing a Routine

Numerology and Your Life – What it is and How to...

Spiritual Spring Cleaning – How to Make the Most of Your...

The 7 Main Chakras Guide to The Spirits Chakra Energy System